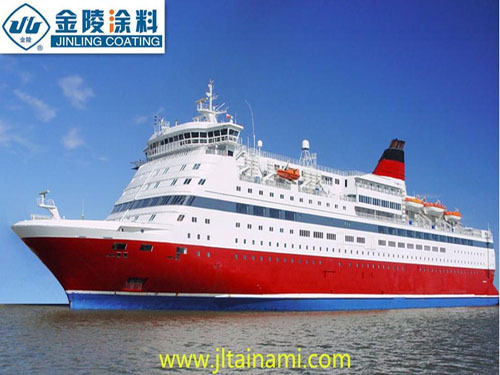 As we all know, the harsh corrosive environment of the sea has a very important impact on the operational life and navigation performance of the ship. In order to minimize the corrosion of the hull material, the ship has adopted various protection methods from design to manufacture, such as hull painting protective coating, adding sacrificial anode or electric corrosion protection, and using hull materials with strong corrosion resistance. Among them, coating anti-corrosion coating is the most extensive and most convenient protection means.

According to the ship's corrosion situation and various parts of the protective performance requirements, after many years of practice and application, marine paint has formed its own system, mainly divided into anti-rust primer, hull top paint, fresh water tank coating, anti-fouling coating and Special function coatings.

Marine rust-preventing primers are traditionally classified into interior paint and exterior paint according to the use area. In the past, chlorinated rubber systems were commonly used as rust-preventing primers for shipbuilding, and bituminous primers were commonly used as protection for areas where the corrosion of water below the waterline and in ballast tanks was severe.

According to the use performance, the chlorinated rubber primer has the advantages of excellent coating performance, good coating film formation, and recoatability, and the price is relatively low, so it has been widely used. However, because chlorinated rubber primers have the disadvantages of aging and toxicity, they can only be used as a low-grade coating. At present, most of them are replaced by acrylic primers and epoxy primers, and are only used in small quantities on ship repairs. With the development of technology, nowadays modified epoxy coatings have a tendency to completely replace anti-rust primers, and pure epoxy primers with superior performance are also widely used by new shipbuilders.

Due to the pollution of asphalt to the marine environment, from the late 1990s, the use of epoxy asphalt coatings as an anti-corrosion coating was basically banned internationally, and international asphalt coatings and tar epoxy coatings have basically stopped production. However, due to the excellent anti-corrosion properties of asphalt and the strict requirements of domestic laws and regulations, domestic manufacturers are still producing related products.

In the past, traditional shipbuilding usually used chlorinated rubber topcoats as the outer paints, but due to the inherent deficiency of chlorinated rubber top paints, it was gradually replaced by acrylic topcoats. Due to the defects of easy-to-powdering, acrylic topcoats have been used in recent years, and shipbuilders are now using epoxy topcoats and polyurethane topcoats. Polyurethane topcoat has many advantages such as high hardness, good color, and strong light retention, and it is gradually becoming the leading product of hull topcoat.

Freshwater tank paints are commonly used pure epoxy paints, and there are two kinds of high solids and solvent-free epoxy paints. The latter requires high equipment and technical level for construction, and small cabins are rarely used. At present, from the point of view of use, there are widespread difficulties in construction and incomplete removal of odors. The water quality of fresh water tanks has not been greatly improved, and it is used as domestic water at most, and it is difficult to meet drinking water standards.

High-grade freshwater tank paints are currently produced in small quantities and generally require import. Not only the long supply period, but also the high-grade paint construction conditions are harsh, the environmental temperature, humidity, ventilation conditions, rust removal level, spraying equipment requirements are high, even if the small and medium-sized shipyards in accordance with the requirements of the ship owner construction, the use of high-grade freshwater cabin paint, also It is difficult to meet the performance requirements that coatings should have.

In order to prevent bio-corrosion of the hull and sea organisms and affect the speed of the hull, the underwater part of the hull generally uses anti-fouling paint to inhibit the development of sea creatures. Traditional antifouling paints use compounds containing arsenic, cadmium, lead and tin to kill marine organisms, but these compounds eventually enter the human body through the enrichment of marine organisms, which seriously endanger human health. At present, it has been issued by the International Maritime Organization as a "decree".

Special functional coatings have emerged as the market for ships has grown in depth, including tank coatings, fire retardant coatings, chemical tank coatings and high temperature coatings. Most of these coatings are custom-made according to the specific conditions of the cabin and the different loads.

Nowadays most of the market for marine coatings is controlled by foreign companies, such as international coatings, Kansai coatings, PPG coatings and other large multinational companies; while local companies only occupy a relatively small share, such as Shanghai Kailin, Xiangjiang Coatings, Jiangsu Jinling The only way for local companies to try to catch up with foreign companies is to â€œstrengthen internal strengthâ€, increase scientific and technological research and development, and improve the training mechanism for scientific and technological personnel.

Hunting knives are mainly used for cutting, skinning and other work during hunting in the wild.The hunting knife is usually equipped with a Oxford cloth knife pouch,it is easy to carry.The hunting knives our factory produced are usually made of Damascus steel with exquisite patterns and excellent packing. They are the best choice for both self-use and gifts.